Ancient Stories from the Ancient Past

While texts from day-to-day life provide immediate insights into the very personal concerns of individuals living in the ancient world, literary works also give glimpses into different aspects of daily life, even if their accounts may be embellished. In the Life and Martyrdom of two saints, Panine and Panew, the story begins with the boyhood friendship of the two, who would later go on to become monks and then martyrs. One episode in the life of Panine sends us back to his classroom, and what follows focuses on the window into the world of education in late antique Egypt that it contains.

The story is preserved in two different manuscripts, which today are in the collections of the Austrian National Library in Vienna and the National Library in Naples, but neither are complete. The manuscripts derive from the library of the White Monastery in Sohag and date to the 9th-11th centuries, although the story was originally composed around the 6th/7th centuries. The first surviving fragments start when Panine’s mother journeys to Antinoopolis to visit her parents. At this point, Panine is still known by his birth name, Symphronios. Whatever reason led his mother, Jonia, to bring him to the city is lost, but her parents rejoiced and immediately entered him into the classroom of a local notarial scribe called Silvanos. And Symphronios quickly excelled at his studies.

“The young boy Symphronios progressed daily through the teaching and the fear of the Lord. The eyes of his mind were enlightened and he quickly learned the art of writing. He began to surpass the older students, who had already received tuition in reading, accounting, and mathematics, and they became jealous of Symphronios, because they saw that he was cleverer than them and had surpassed them in the (study of the) Old Testament. The young boy Symphronios learned day-to-day writing (lit: ‘small hand’) in six months, and then book hand (lit: ‘big hand’) was written out for him.”

The curriculum that the boys followed in this metropolitan setting is here laid out, in terms of literacy and numeracy, as well as the different kind of scripts that they learned. First, they learned to write a common hand, which they would use in their daily writings. Once they had mastered this, they were able to move on to book hand – the type of hand that was used for producing literary works. Symphronios is able to move on to this more advanced writing skill after only six-months; how long the older boys had been learning is not stated, but clearly six-months was extraordinarily fast and earned him the even greater ire of his classmates.

“When the first letter was written for him, the older students on the same day became even more jealous of him. One of them, called Alexandros, who was related to the hegemon Arianos, said to his teacher ‘[…] Symphronios from Terôt-Shmoun, I can teach him and show him the principals of the letters.’ But the schoolteacher Silvanos said to him, ‘He doesn’t need any one of you to help him, because that young boy is clever than you.’”

Not the most subtle of responses from the schoolteacher …

“When Alexandros and the other older students realised that their teacher had made them look like idiots before Symphronios and […] Symphronios. And when their teacher wrote for all of them, he also wrote the second letter for Symphronios. He then left while they were sitting in the school’s courtyard and the teacher went home to eat bread.”

With the teacher, Silvanos, out of the way, the students – led by Alexandros – now take matters into their own hands.

“Alexandros and the older students said to the small young boy, the holy Symphronios, ‘Quickly, show us your writing-board, so that our teacher will not […] us for your aptitude.’ Immediately, the young boy Symphronios got up and showed the letters with great cleverness, like someone who had spent a long time in the classroom. The student Alexandros – the Devil filled all his body – jumped upon the young boy Symphronios. He grabbed his two thumbs, on his left hand and on his right hand, and bent and pulled them until their bones dislocated from their joints. Then he said to him, ‘Try to hold the pen now, peasant!’”

With his mutilated hands, Symphronios remained silent, leaving the matter to the Lord. During this time, Symphronios was friends with another boy, Panew, in whose company he sought solace. Panew informed the teacher that it was Alexandros who had committed the act, but when it was time to fetch him for punishment, Alexandros was nowhere to be found. Symphronios returned to his mother’s house for three nights. On the fourth day, he returned to Panew to go to school, for the Lord had miraculously healed his hands during the night.

The manuscripts break off after this point. But, from this episode Symphronios earned his new name: Panine, ‘he of the thumbs’.

The schoolroom setting allows the God-given cleverness of Symphronios/Panine to be displayed – and sets the scene for the miraculous healing that he received following the assault by Alexandros – but in doing so it provides glimpses into the atmosphere inside a late antique classroom in the city. Here, the young smart kid received the brunt of the jealous anger of the older students. Bullying is certainly nothing new.

Designation: Life and Martyrdom of Panine and Panew 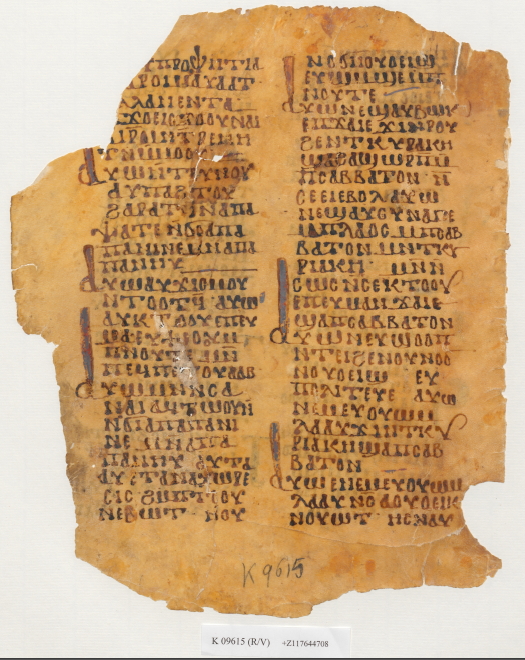 One thought on “Jealousy, Bullying, and Broken Thumbs”